Telangana on alert in view of heavy rainfall 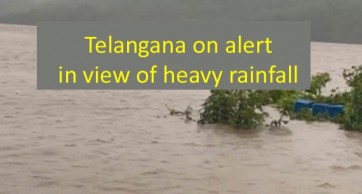 Hyderabad, July 26 (IANS) With heavy rain continuing in different parts of Telangana, the state government has alerted all the districts.

Chief Secretary Somesh Kumar directed all the officials to be on high alert and ensure that there is no loss of human life.

Chief Minister K. Chandrasekhar Rao, who is in Delhi, has been closely monitoring the heavy rainfall situation in the state.

The chief secretary held a video-conference with all the District Collectors and senior officials.

Somesh Kumar mentioned about the flow in the Musi river which has resulted in huge inflows of water into Himayat Sagar and Osman Sagar, the twin reservoirs on the outskirts of Hyderabad.

He asked managing director of the Hyderabad Metro Water Supply and Sewerage Board (HMWS&SB) to work in close coordination with the Greater Hyderabad Municipal Corporation (GHMC) and regularly monitor the water flow in these reservoirs.

Relief camps have already been identified by the GHMC and if needed, people to be affected by the release of flood waters from these reservoirs have to be shifted to these camps, he said.

Meanwhile, release of water from Osman Sagar into Musi has cut off road link between Narsingi and Manchirevula in the city.

Right gates of Osman Sagar have been lifted to release water into Musi river, which flows through the city.

The chief secretary also asked all the district collectors to be vigilant regarding causeways, low-lying areas, breaches to roads and tanks.

All officials have to be stationed in their headquarters and any untoward incident has to be brought to the notice immediately for taking necessary action. All the line departments should work in close coordination, he added.